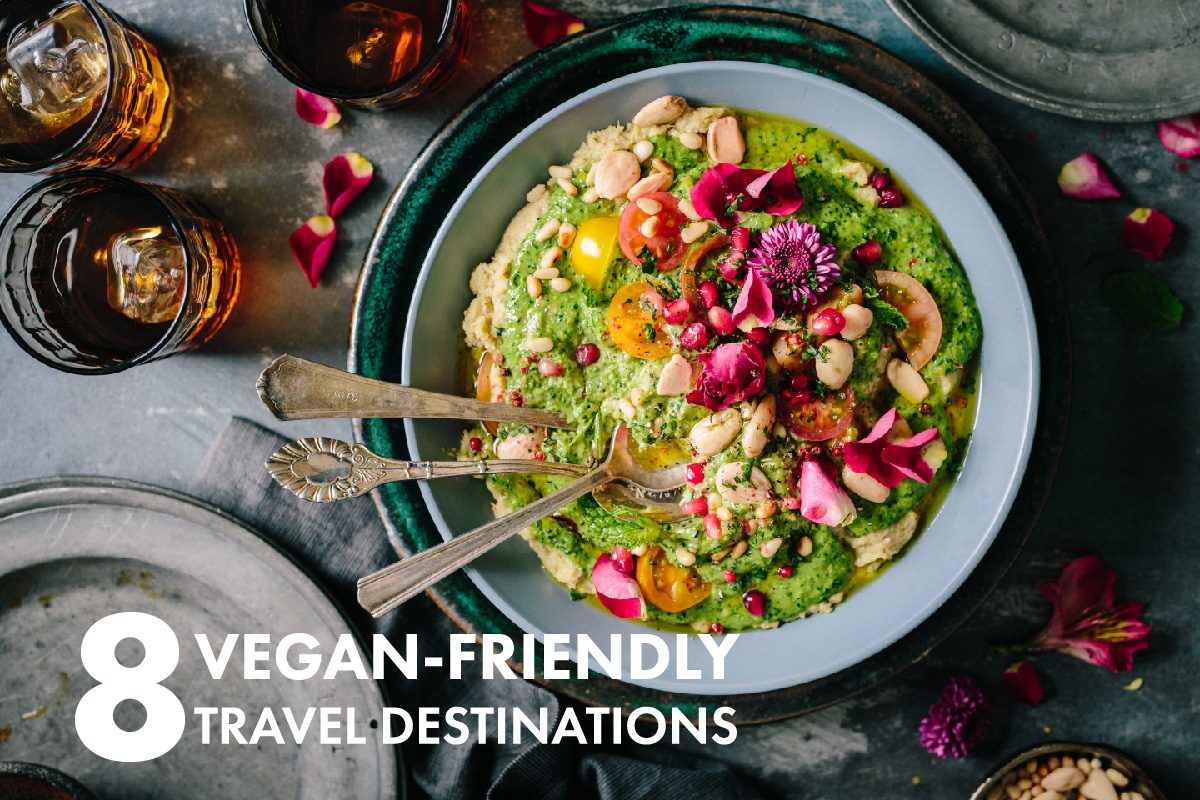 Love to travel and eat vegan food? We’ve compiled a list of 8 vegan-friendly travel destinations to check out in 2019!

Vegan dishes in Bali are like works of art – tons of vibrant pinks, purples, greens and oranges, it’s almost too pretty to eat. Some serious creativity goes into making the tropical veg fare appetizing to even the most carnivorous of travelers. Breakfast will become your favorite meal of the day, after all, who can resist a good açaí bowl.

London has many vegan-friendly restaurants, bakeries, cafes and smoothie bars. Veganism is no longer a niche market in the UK – it has gone mainstream. international vegan cuisine options — ranging from Mexican to Italian to indulgent sweet goodies — can be found around every corner, and will satisfy any craving.

New York’s vegan scene continues to flourish, boasting 64 vegan restaurants in a 5-mile radius of the city. To avoid missing any of these hidden vegan gems in New York and other cities globally, use the HappyCow app and sort by highest rated!

At least half the food options in India are vegan or vegetarian. Look for dishes like vegetable curries, roti bread, masala dosa, vegetable biryani, aloo puri, and momos (dumplings) — none of which typically include animal products.

This serious foodie destination is worthy of vacation for the cuisine alone!  Mexican food is a vice I’m sure we’re all susceptible to, though it often hides lard and dairy — but authentic, colorful Mexican that is entirely vegan? You just need to ask to remove a few key ingredients so you don’t get a plate covered in cheese in front of you.

Being vegan in Thailand is easy. Fruit stands are at every corner, fresh markets are abundant, and the demand for organic products is growing. It is always possible to get vegan options in Thai restaurants since their traditional cuisine is mostly composed of vegetables. Just be sure to let them know you are vegan as most dishes tend to be cooked with chicken broth or fish sauce.

California is progressive, trendy, and also vegan-friendly. Between major cities like San Francisco, Los Angeles, and Berkeley, there are a plethora of vegan-friendly eateries for those of us who like to keep it plant-based. Vegans will feel right at home here as California’s reputation as the home of animal-rights activists and health-conscious, clean-eating beauties alike is prominent.

The vegan scene has been exploding in Toronto with a wave of new arrivals. Meatless eating has never been so varied, stylish or delicious.  From vegan pizzerias to veganized versions of classic diner foods, to create-it-yourself vegan protein bowls, to upscale vegan experiences – this city has you covered.

If you have a favorite vegan-friendly destination – and it wasn’t mentioned – leave a comment below!

*Unsubscribe at any time by clicking the link at the bottom of our emails.

Thanks for stopping by again!

We are thrilled to have you! Learn how we help businesses like yours save time and money while also identifying efficiencies and complying to your travel policy.